This excerpt is from Monster Portraits written by Sofia Samatar and illustrated by Del Samatar, which is out this week from Rose Metal Press. We’re also featuring a review by Desirina Boskovich. 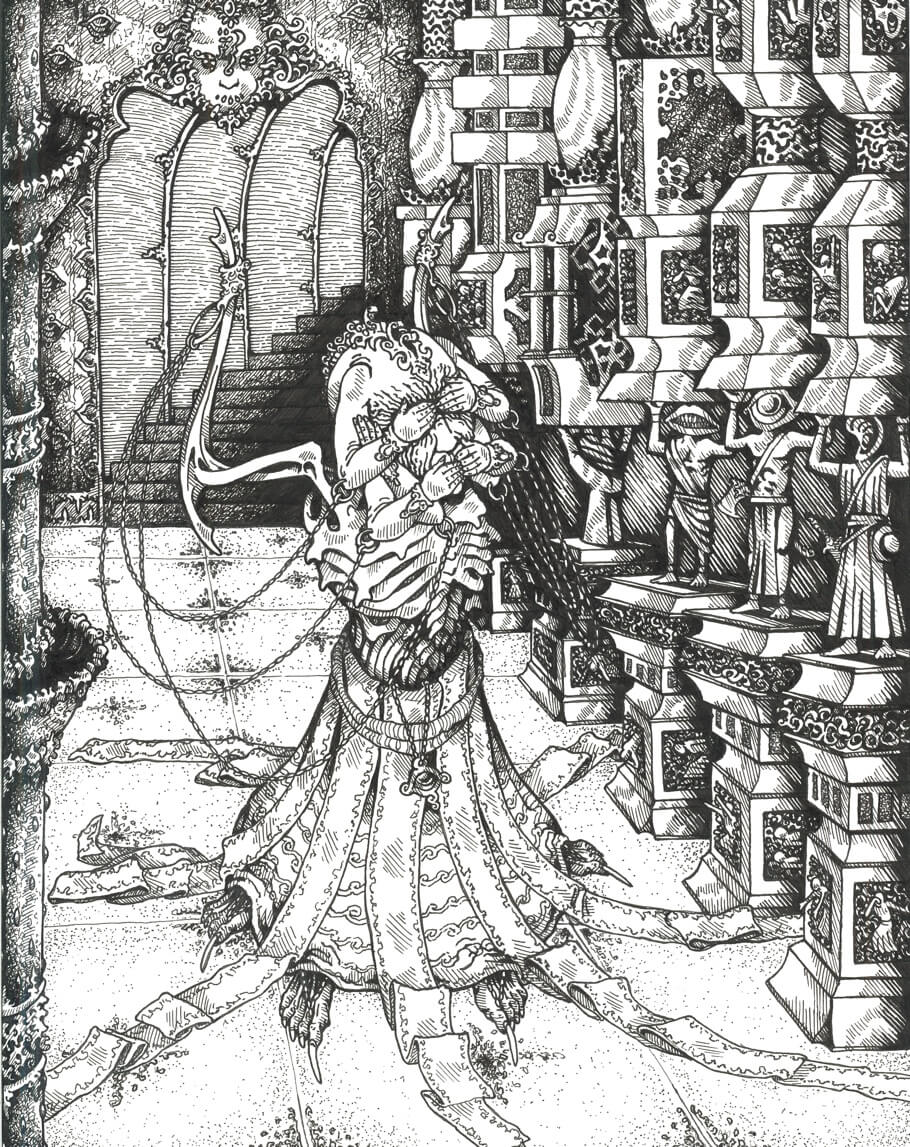 The Collector of Treasures

The Collector of Treasures

FIGURE OF A COLT WITH A MAN’S FACE

FIGURE OF A WINGED MONSTER

You are inferior as a Coloured.

FIGURE OF A MONSTROUS PIG, BORN IN METZ IN LORRAINE

PICTURE OF A TRITON AND A SIREN, SEEN ON THE NILE

London, a Tube station, the year 197_. A strange Englishman grasps my father by the shoulders. He kisses my father on both cheeks. The Englishman is ecstatic. “Ah, are you Abyssinian? What a magnificent species!”

FIGURE OF A CHILD, PART DOG

TWO FIGURES, ONE OF A FURRY GIRL, AND THE OTHER OF A CHILD THAT WAS BLACK BECAUSE OF THE IMAGINATION OF THEIR PARENTS

They maintained their attractive character throughout, and under the trying conditions of the Yorkshire climate behaved in a most creditable manner.

The Collector shakes the universe and makes it lie down flat. The universe cries out like an injured child.

FIGURE OF THE HORNED OR HOODED MONSTER

Ambroise Paré was a French barber surgeon born in 1510. He pioneered new techniques in battlefield medicine. He was especially good with wounds, which he treated in the old Roman way, using oil of roses, egg white, and turpentine. He was also a great collector. His book Des monstres et prodiges is an illustrated compendium of the monsters of his time. His goal, explains his translator, was to discover, through the accumulation of data, why the normal has failed to occur.

FIGURE OF A GIRL HAVING TWO HEADS

According to the logic of collection, the monster always belongs to others.

FIGURE OF A VERY MONSTROUS ANIMAL THAT IS BORN IN AFRICA

I am afraid Ambroise Paré would have liked this book.

In the realm of language, the opposite of a monster is a catalogue.

In the fields of Soinoe she went slaughtering flowers. She said she could take me with her. I said yes. I explained that this is what monsters say to themselves in the mirror: yes. yes.

White fog filled the valley. She explained that it was a river of floating seeds. The seeds have been waiting to sprout for five hundred years. Several white birches stood among them, and the ruins of a little building, perhaps a shrine.

There are absolute places where time stops. Nothing is good about them. You can’t breathe. Against them we raise a defiant reverence for the body.

Hold your breath, she whispered. The night was blue and perfectly still. I realized that we were passing through a bad place. The fortune, the heavy good fortune of passing through. In a lighted window a child in goggles was giving a lecture from a podium made of crates.

When we had reached the other side I told her a story:

“Everyone was drunk. They were trying to figure out if I was métisse or chabine. Métisse is dark-skinned with European features, chabine is light-skinned with African features. Trees sighed in the night behind the bar.”

Such detailed racial cartography. Sometimes, I told her, the storms were so violent, you would have thought the whole island would sink under water.

She took me to see her favorite spot, a wall the color of artichokes. Wherever she went she glistened like fire and snow.

Holy holy holy is the Lord who preserves entire the conflicting element of my being.

And the vivid lake. And the pink butterflies of the horizon. The hills that smelled of apples and milk. The chill beneath the stone portico. The bridge. The train in the night like a necklace of tourmalines.

THIS IS MY NAME:

She had written those words and her name on the artichoke-colored wall, many years ago, when she was afraid to travel. She used to be so afraid, she could hardly stand to leave the house. A few petals dotted her flanks, bright as human blood. “Don’t you want to know what they decided to call me,” I asked, “métisse or chabine?” “No,” she laughed. In the evening she took me to meet the train. I wore net gloves to disguise my bandaged hands.

Her breathing lit up the whole street.

Light is a thing but lighting is a relationship. 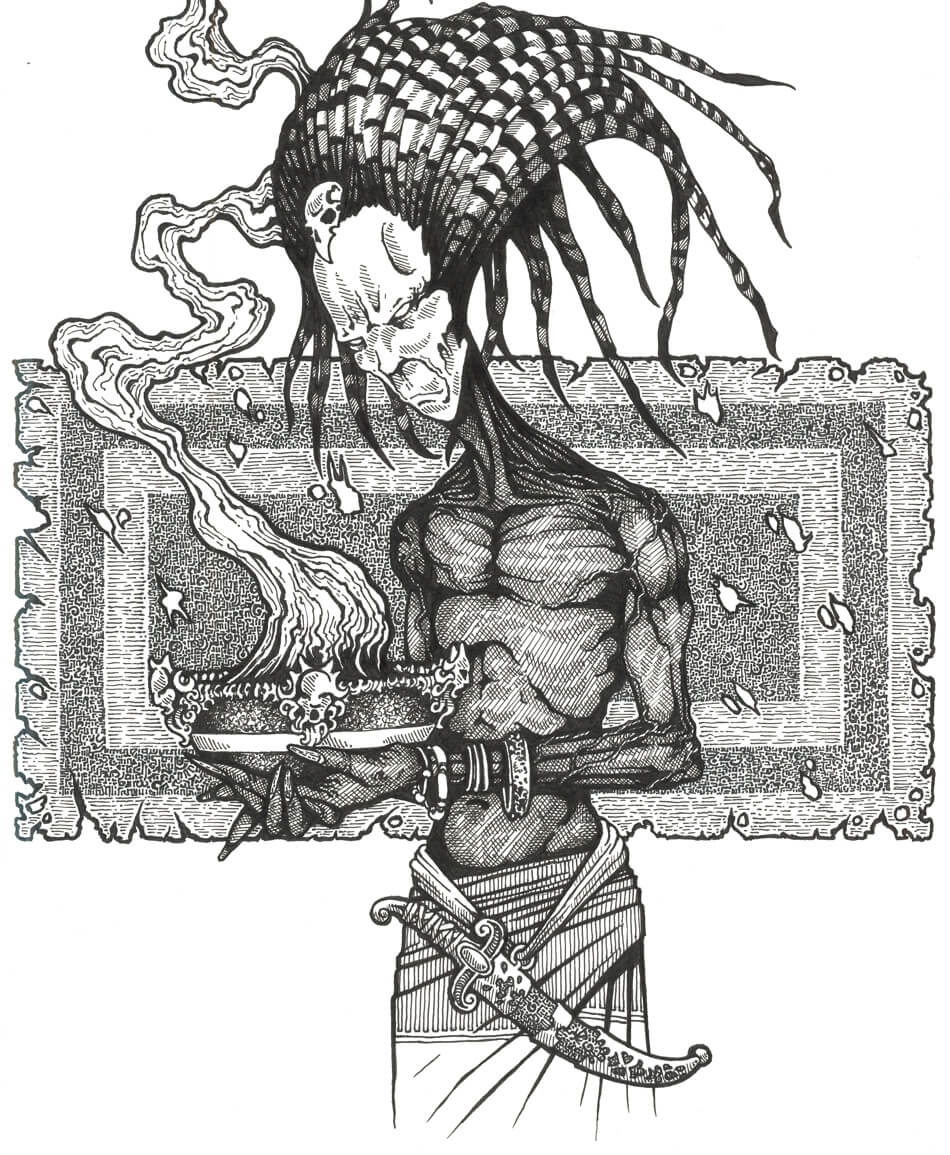 It became necessary for me to visit a doctor. His office lay behind a great wooden door in a district known as the Swoon. The door was so heavily carved it took me some time to find the handle, turning my head from side to side to peer underneath the planes of light. “I have a cough,” I explained, “and these pink planes of light are following me everywhere.” I waved my hand in the light. The flesh turned red. Through the rays I could see the doctor’s face, immemorial and sad, a carapace much like the carvings on his door.

“Pity me.” He instructed me to lie down on the carpet. While he brewed his herbs I thought about compassion. Cries on the wind for two hundred years. Accursed creator! Why did you form a monster so hideous that even you turned from me in disgust?

The grotesque confuses categories. One of the ways this can happen is through time compression. Think of a larval creature with fully developed eyes. Imagine youth crushed into age, a misshapen life story. A giant baby, or one that looks like a little old man.

In the eighties there were all those photos of starving Ethiopian children. Long fingers, heads as fragile as blown glass. Usually the grotesque creates a reaction of nausea or prurient attraction but the little-old starving children were supposed to produce compassion. I guess it worked. I always had a feeling of panic when I saw them, they were so close to me. A kind of survivor guilt. Compassion, yes, but revulsion too, and shame like a bridge between them. A feeling like a needle in my eye.

We Are the World. What an awful song. There’s grotesque for you. For some reason, we always cracked up when Willie Nelson came on. My brother could mimic his voice perfectly.

We were very joyful kids, as I recall.

The doctor approached with his bowl, rosy in the light.

“Feed me.” A child is dying. My friend protested against the deaths of Palestinian children. Someone replied: “You wish Israeli children were dying.” “That is monstrous,” she answered him, “a monstrous thing to say.” For a long time I tried to think of a word that could replace “monstrous.” Terrible? Vicious? Cruel? But only “monstrous” really expressed where he had placed himself with his words: outside the wall. By suggesting that she would not feel compassion for a child, that she would desire the death of children, he had become someone for whom we could never feel compassion.

I began to drink from the bowl. A prickling started under my skin. I understood that I was having a reaction.

The monster evokes, in equal measure, both compassion and its opposite.

I understood that I would have to drink it all.

Capitalized text comes from the list of illustrations in Ambroise Paré, On Monsters and Marvels. 1573. Translated by Janis L. Pallister, University of Chicago Press, 1982.

why the normal has failed to occur: Janis Pallister, introduction to Ambroise Paré, Of Monsters and Marvels. 1573. Translated by Janis L. Pallister, University of Chicago Press, 1982, p. xxvi.

Holy holy holy … being. Eliot Weinberger attributes these words to an angel made of snow and fire in An Elemental Thing. New Directions, 2007, p. 167.