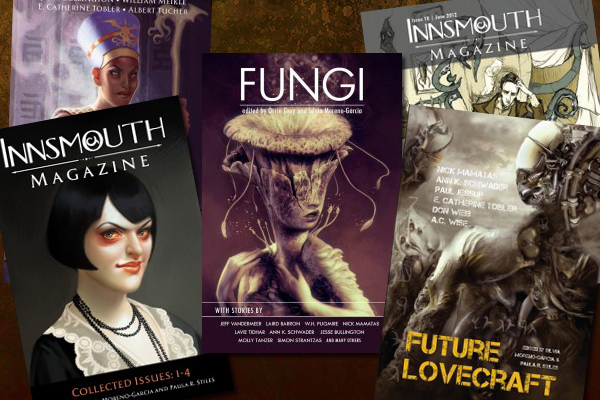 Innsmouth Press is trying to raise money for a Swords and Mythos anthology—be able to pay professional rates. The press produces a quality product — we’ll be promoting their Fungi antho sometime in the coming months — and editor Silvia Moreno-Garcia has firmly set out in a post entitled “Double Trouble: Two Racists for the Price of One” more about why they’re doing it.

As a POC writer, editor and publisher, I have two choices: to completely ignore writers like Lovecraft and Howard, and the sub-genres they helped shaped, or to engage them. Neither choice is worthier than the other. There are plenty of writers who may not see the point in penning Mythos stories or writing sword and sorcery adventures. They may choose instead to write magic realism, surrealism, science fiction, literary fiction or a bunch of other things.

However, I prefer to engage them. I think that if we don’t go into these spaces that have long been closed to us, where we have often been viewed as the alien or the exotic element, we will never be represented there. I also think that just because a space was originally designed with no room for us, it doesn’t mean that’s still the case. Women, for example, did not have a great space in sword and sorcery until the 60s and the 70s, but then we had anthologies like Sword and Sorceress. That doesn’t mean representation of women or of female writers in these sub-genres is perfect, but the emergence of heroines in the sword and sorcery arena proves that things can change.