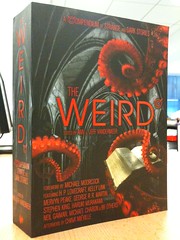 The official press date for release of The Weird: A Compendium of Strange and Dark Stories in the UK is November 10 (Book Depository has free shipping to the US). There will be lots of coverage from then on – in fact, we’ll on Irish radio, possibly as early as November 18 – but in the meantime a couple of intrepid reviewers have already begun to tackle The Beast, story by story: D.F. Lewis and Maureen Kincaid-Speller. This is an act of extreme heroism, as far as we are concerned, no matter what their reactions to the anthology over all and we applaud them for it. The full TOC to our 116-story antho can be found here, and here are the relevant links to their read-throughs:

Also of interest, Lewis’s prior post on “What Is Weird Literature and Who Represents it?” (Here at WFR, we’d argue no one represents it so much as some writers embody it or explore it.)

–First Thoughts on The Weird
–The Weird and Me
–“The Other Side” by Alfred Kubin (Kubin is featured next week on WFR)
–“The Screaming Skull” by F. Marion Crawford
–“The Willows” by Algernon Blackwood (which you can read on WFR)

It would appear that Solar Bridge is also  planning to ramp up a story-by-story read shortly.

Finally, we noted these thoughtful posts about Weird Fiction Review and the anthology by John Coulthart and Sparks in Electrical Jelly.

We’ll post new links to the story-by-story reads as we have them.