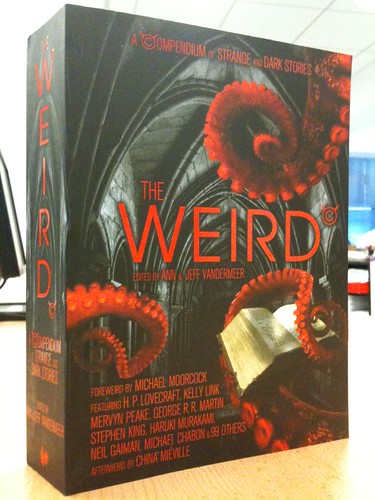 Hot off the presses: a photograph of The Weird, taken by our fearlessly weird editor at Corvus Command & Control.

We’re proud to announce the publication by Atlantic’s Corvus imprint
of The Weird: A Compendium of Strange and Dark Fictions. We have collected over one hundred years of weird fiction in a single volume of over 750,000 words, starting from around 1908 and ending in 2010. More than eighteen nationalities are represented and seven new translations were commissioned for the book, most notably definitive translations, by Gio Clairval, of Julio Cortazar’s “Axolotl” and Michel Bernanos’ short novel “The Other Side of the Mountain” (the first translations of these classics in over fifty years). The publishers believe this is the largest volume of weird fiction ever housed between the covers of one book.

Although anchored in many familiar and iconic names — including Stephen King, Shirley Jackson, Jorge Luis Borges, Octavia Butler, Clive Barker and George R.R. Martin — The Weird also gave us an opportunity to showcase several great writers not as well known to readers of the weird. French master of weird fiction Claude Seignolle, for example, is represented herein with “Ghoulbird.” Readers will also be delighted to discover the work of the great Catalan writer Merce Rodoreda (with the phantasmagorical “Salamander”), grotesqueries by English surrealist Leonora Carrington, an excerpt from Kafka precursor Alfred Kubin’s cult classic The Other Side, and Hagiwara Sakutoro’s quintessential rumination on the boundary between reality and the weird, “The Town of Cats.”

Other highlights include the short novels / long novellas “The Beak Doctor” by Eric Basso, “Tainaron” by Leena Krohn, and “The Brotherhood of Mutilation” by Brian Evenson.

Here’s the full table of contents for The Weird, which we’ll be talking about throughout the month of November. – Ann & Jeff VanderMeer

Story order is chronological except for a couple of exceptions transposed for thematic reasons. Stories translated into English are largely positioned by date of first publication in their original language. Authors are North American or from the United Kingdom unless otherwise indicated.

31 replies to “The Weird: A Compendium of Strange and Dark Stories (table of contents)”