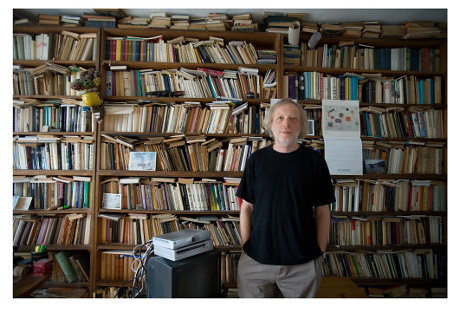 Michal Ajvaz (1949 -) is a brilliant Czech novelist, poet and translator. Born into an exiled Russian family, Ajvaz studied Czech studies and esthetics at Charles University in Prague. He did not begin publishing fiction until 1989, due to the political repression in the Czech Republic (then Czechoslovakia). Ajvaz’s brand of fiction would have been antithetical to any entrenched orthodoxy. His novel Prázdné ulice was awarded the prestigious Jaroslav Seifert Prize for literary achievement (2005). English-language translations include the critically acclaimed The Other City (2009) and The Golden Age (2010) from Dalkey Archive Press. Ajvaz often comes by the “weirdness” in his fiction through dark humor and absurdity, as exemplified by his story “The End of the Garden” (1991), included in our The Weird compendium. (See also Jeff’s review of The Other City.) - Ann & Jeff VanderMeer

Weirdfictionreview.com: Was weird fiction welcome in the household the young Ajvaz grew up in, and what form did it take?

Michal Ajvaz: At the time of my childhood, in the 1950s, in Czechoslovakia, it was impossible to buy weird books (or any non-realistic books) in bookshops. But there were some ways and my father was a really literate man, so we had a big bookcase with good books, some of them retained from the time before World War II, some of them  bought in secondary bookshops, and the bookcase became an area of adventurous expeditions with exciting discoveries for me as a child. There were not so many of weird books in the bookcase, but I found there for instance Poe or Gustav Meyrink. I also began soon to discover books myself and to search for them in secondary bookshops. Then at the beginning of the 1960s the political and cultural atmosphere in the country changed and many books were allowed to be published that where prohibited formerly. (Then in the 1970s, after the Soviet invasion, everything got worse again.) The first weird authors I encountered were Poe, Alexander Grin, and Ray Bradbury, when I was ten or eleven, then E. T. A. Hoffmann and Ambrose Bierce when I was twelve, Kafka when I was fourteen, then Ladislav Klíma (Czech philosopher and novelist), Lautréamont, Villiers de l´Isle Adam, Mandiargues, Alfred Kubin, Junger… I didn´t read H.P. Lovecraft until I was thirty-five, even if I had known his name since my childhood from Bradbury´s The Martian Chronicles, but there was no possibility to get his books in Czechoslovakia.

WFR: How much as weird fiction, as you define it, influenced you?

Michal Ajvaz: Probably each of the named authors had a part of influence on my writing, the most of it probably Kafka, Junger, and Mandiargues. But I was also influenced by authors writing fiction that we could not label as weird like Rilke, Proust, or Nabokov…

WFR: Is weird fiction about the scare, about the unknown, about catharsis, or…?

Michal Ajvaz: … or about miraculous side of the universe.

WFR: Is there such a thing as “too weird”? And has anyone ever accused you of being “too weird” with regard to your fiction?

Michal Ajvaz: I was accused of being too weird by critics who were proponents of the realistic story. And I can imagine a book that is really too weird: a book whose weirdness doesn´t come from the soul of its author and which substitutes this absence of true weirdness (which doesn´t need to be too weird in many cases) by piling up superficial effects.

WFR: What’s the weirdest thing you ever read?

Michal Ajvaz: This question is difficult to answer, as there is more than one meaning of the word weird. But maybe I can name the so-called The Great Novel by Ladislav Klíma – a mixture of thriller, fantasy, philosophical fiction, horror, humour, and pornography which was published at the first time seventy years after author´s death.

WFR: Your story in The Weird is not just weird but also somewhat surreal and absurdist, at least to our eye. How aligned with surrealism, absurdism, and other isms is weird fiction?

Michal Ajvaz: [Above I have noted that] in my opinion weird fiction is connected with discovering of the miraculous side of the world. I think this feature also creates a [link] between weird fiction and surrealism. Of course, there are surrealists which are more weird (Mandiargues) and surrealists which are not so much weird (Aragon in Le Paysan de Paris, for instance), but in my opinion weird fiction and surrealism of all sorts are united by the common refusal to admit that the world is an uninteresting, dull place where nothing miraculous is to be expect and that the task of literature is to depict this dullness… And absurdism: Kafka above all reveals the other side of this new look at the universe, the side that is darker and depressive, but that reveals life as an expression of the same mystery… The ecstasy of surreal imagination and Kafka´s dejection are the two sides of the same view of the universe, the view liberated of habitual patterns of our experience. And, of course, both surrealism and Kafka were of a great influence on my writing.

WFR: When the weird in weird fiction fails for you, what’s usually the reason?

WFR: If you had to pick one weird writer who is overlooked and needs to be resurrected and better appreciated, who would it be?

WFR: Finally, is there one weird story in particular that means the most to you?

Michal Ajvaz: I will name three: Kafka´s “The Metamorphosis” and “The Judgment”, André Pieyre de Mandiargues’  “The Archaeologist”.

6 replies to “The Miraculous Side of the Universe: An Interview with Michal Ajvaz”