Neil Gaiman is an iconic and hugely popular bestselling English writer living in the United States. He has written across multiple genres and media, including fiction, graphic novels, and film. Honors include the Hugo Award, Nebula award, and Locus award, along with the Newberry medal and the Carnegie Medal in Literature. The majority of his fiction tends to fall into categories related to general fantasy, urban fantasy, contemporary horror, mythology, and the weird, as is the case of the story included in The Weird compendium, “Feeders and Eaters.”

WeirdFictionReview.com caught up with Gaiman right before the 2011 World Fantasy Convention. Gaiman was a guest of honor at the con, and two stories from the Stories anthology he co-edited  with Al Sarrantonio won World Fantasy Awards this year. 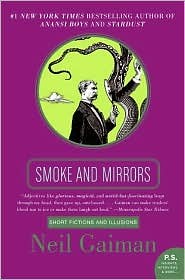 WeirdFictionReview.com: H.P. Lovecraft was an early influence on you, but I’m curious if there’s something you got from Lovecraft that you don’t see mentioned much in discussions of his work — some aspect of his fiction?

Neil Gaiman: The odd thing is that the finest gift from Lovecraft was less the Cthulhupoid stuff and more some amazing pointers at the things that he was influenced by: one of the Granada paperback reprints, Dagon I think, all of which I read when I was eleven or twelve at my grandmother’s house in Southsea, contained his essay on Supernatural Horror in Literature and it was like being handed a road map for where I should be reading and what I should be looking for.

I don’t know if I would have found Arthur Machen

without it, for example. I am quite certain I would not have bought Robert W. Chambers’ The King in Yellow.

As a boy, I didn’t think Lovecraft was a top flight author in his early stories. Once he got to stories like “The Call of Cthulhu” it seemed as if he had found his voice — it seemed to me then that much of his earlier stuff seemed to want to be Clark Ashton Smith or Lord Dunsany.  I don’t know if I’d feel that way now, or if I’d mind as much. I’m a much more forgiving reader now than I was when I was twelve.

WFR: Besides Lovecraft, what weird writers did you read growing up? And were there any hidden gems in terms of stories or authors that you don’t think people remember much today but should?

Gaiman: Dunsany, definitely. It’s a crime that there’s not a Complete Short Stories of Lord Dunsany somewhere. Chambers’ King In Yellow stories were haunting and affected me oddly. Fritz Leiber’s short stories and novels like Conjure Wife were creepy stuff for a pre-teen. And R.A. Lafferty, who could weird with the best of them when he wanted to.

WFR: What do you think is the appeal of weird fiction generally?

Gaiman: For me it’s like a visit to a strange place — a holiday in unearthly beauty and oddness, from which you may not always safely return.

WFR: Do you see a difference between “horror” and “the weird” and “the gothic”, and does it matter to you as either a writer or reader?

Gaiman: I think of Horror as a section of a bookshop, gothic as a type of book that ended, truly, with Northhanger Abbey, and The Weird as an attempt to unify whatever it was that Robert Aickman did, that Edward Gorey did — using the tools of horror to delight and transform. But I could be full of it. And no, it doesn’t matter.

WFR: When the weird in weird fiction fails for you, what’s usually the reason?

WFR: Is there such a thing as “too weird”?

WFR: The story of yours included in The Weird compendium, “Feeders and Eaters,” is a sharp shock of the strange, with not a wasted word. What kinds of things changed about it  in reimagining it as a short story as opposed to a comic?

Gaiman: It was a dream I tried to get down on paper. I wasn’t happy with it as a comic, although I thought that Mark Buckingham did a brilliant job of painting it. So writing it as a short story gave me a second go at getting it right.

WFR: How often does the real world give you something seemingly inexplicable, something weird, that becomes a spark for a story or novel?

Gaiman: Enough. The real world has no obligation to be convincing, so it throws up some very weird moments sometimes.

, I think. Or Joel Peter Witkin’s Gods of Earth and Heaven.

WFR: Thanks very much for the interview. Those are both very weird books indeed.

– A Humument was an evolving project by Phillips in which he took a Victorian novel and began to mark out certain paragraphs, sentences, phrases, and words to reveal a different story hidden in the original text. These changes included Phillips’ drawings,which in their obliterations of the foundational story revealed yet other levels.

9 replies to “Exclusive Interview: Neil Gaiman on The Weird”